AKC is a charity I have held close to my heart for many years. I know it comes from good bones, as I know the three people who started it and what great spirits they have. I am honoured to be involved with AKC and to be able to see it come through the last few years of change. For a few years it had seemed that the overall patronage was lessening; less people attending the annual art auction, less people applying for the funds and very importantly committee numbers had diminished. After noticing this lack of support in 2014, with a question mark hanging over the 2014 Auction, Fiona Larwill and myself sought new committee members such as community leader Ruth Krawat and others to join AKC. New committee members gave AKC a new lease on life and it was decided to go ahead with the 2014 Auction. Post the 2014 Auction, the organisation felt re-energised and we enlisted artists Lewis Miller and David H Thomas to join the committee; both were long-time contributing artists. Shivani Pillai, a long time AKC volunteer and committee member (from the early days) was also encouraged to re-join the AKC committee and Daniel Crennan was approached to fill an upcoming Director vacancy. Lena Glass joined AKC to help in administration but In March 2016 when Chester Rosales resigned, Lena was promoted to the Treasurer role, given her finance background. In 2015 we did not hold an auction. The committee kept re-building and spent valuable time planning for the next phase of AKC. During this time, the AKC bank balance was very liquid and we continued to fulfil our commitments to pay grants. We have an amazing committee and ALL need to be congratulated for their commitment to helping kids do their thing! Some charities should go on forever and I believe this is one of them. We have much great work to do in the future. We have an amazing committee and ALL need to be congratulated for their commitment to helping kids do their thing! Kylie Greer AKC Director

No record available Fin. Year 2010: $70,597 Fin. Year 2011: $71,210 Fin. Year 2011: $25,642 Fin. Year 2012: $72,510 Fin. Year 2012: $26,513 Fin. Year 2013: $54,900 Fin. Year 2013: $20,306 Fin. Year 2014: $49,980 Fin. Year 2014: $22,857 Fin. Year 2015: $58,780 Fin. Year 2015: $20,449 Fin. Year 2016: $5,071 Fin. Year 2016: $30,926 STRUCTURE & MANAGEMENT: The AKC Committee is a volunteer body governed by three Directors with a constitution requiring this. The committee comprises three Directors, a Treasurer, a Secretary and several other members (6-8 is preferable) who contribute directly to the organisation’s activities. Together the committee is responsible for the distribution of grants monies and the annual fundraising to perpetuate the Artists for Kids’ Culture legacy. We are one of the few ongoing charitable volunteer run organisations that are not affiliated with a sporting facility and currently receive no funding outside of the annual auction.All committee members are involved in the assessment and final decision making of grants, which is based on grant guidelines agreed on an annual basis. Committee members are involved in fundraising operations including treasury and general financial management, governance and compliance under ACNC obligations as a charity, grant making administration and agency management, event management and sponsorship, print production and advertising, curatorial management, marketing, PR and communications. OUR OBJECTIVES & ACTIVITIES: Our objectives for 2015/2016 were to re-build the committee and the spirit of AKC. We certainly achieved both these objectives. Artists for Kids’ Culture did not have an Auction fundraiser in the Financial Year 2015/2016. “We Heart AKC” was held on St Valentines Day in February 2016 for artists, AKC recipients, sponsors and AKC Committee family and friends. Ruth Krawat worked very hard to receive donations for the event. The event was not seen as a fundraiser but rather as a “Thank You” day to the artists and a day to meet AKC recipients. On the day we had performances from L2R and a recipient also played us some songs on the piano Shivani Pillai (AKC Committee) MC’d the afternoon and we also had a performance from Renee Geyer and Charlie Owen. Lewis Miller and Ricky Howell sold portraits of people who attended and paid $100 a work. Although it was not aimed to be a fundraiser, we did cover costs and made $1000 through holding a raffle and selling AKC merchandise. UPCOMING: The 2016 Auction is planned to take place at the George Ballroom in St Kilda on the 20 October. Much planning has begun and we are looking forward to a great comeback. GRANT GIVING: Our grant giving has been steadily rising and we aim to continue to find more appropriate recipients for AKC funds. 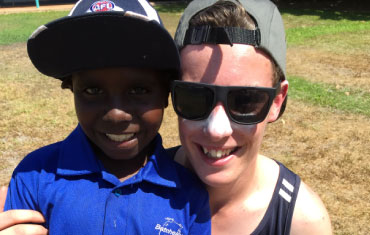 TREASURER’S REPORT: Lena Glass, BA with over 30 years experience in Finance Administration, Compliance and Control/Governance. MESSAGE FROM OUTGOING TREASURER: CHESTER ROSALES (until 30/6/2016): Kudos to AKC: the Directors, the Committee members and the volunteers. Thank you to those who continuously support and believe AKC’s mission. As outgoing treasurer, I would like to share my gratitude to each one in the organisation. It had been two rewarding years. Being part of a team that creates impact in the lives of disadvantaged children is an honour. The best part of it is knowing how we positively affect their lives. The thank you letters from them is a constant reminder of AKC’s good deeds. It is sad to part ways but raising a young family creates limitation. It is quite unfair not to give 100% of my support to this institution whose ultimate purpose is to help and make positive changes to children’s lives. I owe this opportunity to these people: Ken Wright, Mark and Tamara Boldiston, Barbara Agar and Fiona Larwill. I will forever be indebted to you. To Kylie Greer and members of the committee, it is a privilege working alongside with you in grant approval process, activity planning and actual auction. To Lena Glass, the incoming treasurer, you will always have my full support. I completely trust you in executing this role. To AKC, you’ll forever be a part of me. I wish you more success. Kind regards, Chester ROSALES LENA GLASS – TREASURER APPOINTMENT: I was honoured to be appointed Treasurer of AKC in April 2016, officially taking office on 1 July 2016. I assisted the outgoing Treasurer CHESTER ROSALES with Bookkeeping duties and started working with the Committee and Board, until I was an authorised signatory at ANZ Bank. Chester performed the Treasury duties of Banking and Bookkeeping for the whole of FY16 until 30 June 2016. I wish to acknowledge and thank Chester for his support and generous counsel. OBJECTIVE: My initial focus was to assist in restoring our Deductible Gift Recipient (DGR) status. The first step was to ensure registration as a charity. By way of background – AKC was registered as a Company with ASIC but was no longer registered as a Charity, presumably due to an historic administrative oversight in not submitting appropriate documentation to the then newly formed governing body of charities the Australian Charities and Not-for-profit Commission (ACNC) in 2010. RESULT: Although this was completed post this report’s Financial Year, it is worthwhile noting here that The Board is delighted to confirm that AKC was registered as a Charity and attained DGR status in October 2016 (under the Public Benevolent Institution category). This is a wonderful achievement especially after so many years. Details of this process and how it may benefit our Artists and donors/supporters will be described in our next Annual Report for 2016/17. RISK MANAGEMENT: Kylie and I discovered in May that AKC’s Financial Reports had not been recorded at ASIC since 2010, thus it appeared that we were not even meeting our obligation as a Company. I immediately advised Kylie to self-report to ASIC and notify the Board that AKC may incur a fine of up to $1,600. Fortunately the issue was rectified promptly – AKC’s audited Financial Reports for 2010/11 to 2014/15 were accepted by ASIC on 25 May 2016 and we avoided any penalties. This was the best possible outcome! (NOTE: As a result of this swift “damage control” I was also appointed Company Secretary on 17 May 2016 to ensure Risk control and Governance). INSURANCE: AKC allowed the 2015 Insurance Policy to lapse as there was no Auction in 2015. After researching the most cost-effective cover, we reinstated our Policy effective from May 2016. I will periodically review the most appropriate cover as our needs change. MEMBERSHIP FEES: In a Board meeting on Governance in May I advised that the AKC Constitution states we are required to have an annual paid Committee Membership system to ratify voting on issues including the all-important approval of Grants. Following Board approval I initiated the annual fee of $10 in July 2016 (effective from January 2016), and established a Register for audit purposes. FINANCIAL SUMMARY: There was no Auction in 2015 thus Income for FY16 was severely reduced to a residual purchase from the 2014 Auction, supporter merchandise purchases, donations and bank interest (Total $8,256.05). However as AKC still had a very healthy liquidity, this did not affect our operations, and enabled us to disburse grants totalling $30,926.13. Our Total EQUITY was $40,494.83 LOOKING FORWARD: My objectives for 2016/17 are to: Investigate most cost-effective Banking provider (Bendigo Community Bank?). Tighten controls Review and Establish procedures to ensure: Financial Compliance and Governance under the ACNC obligations etc. 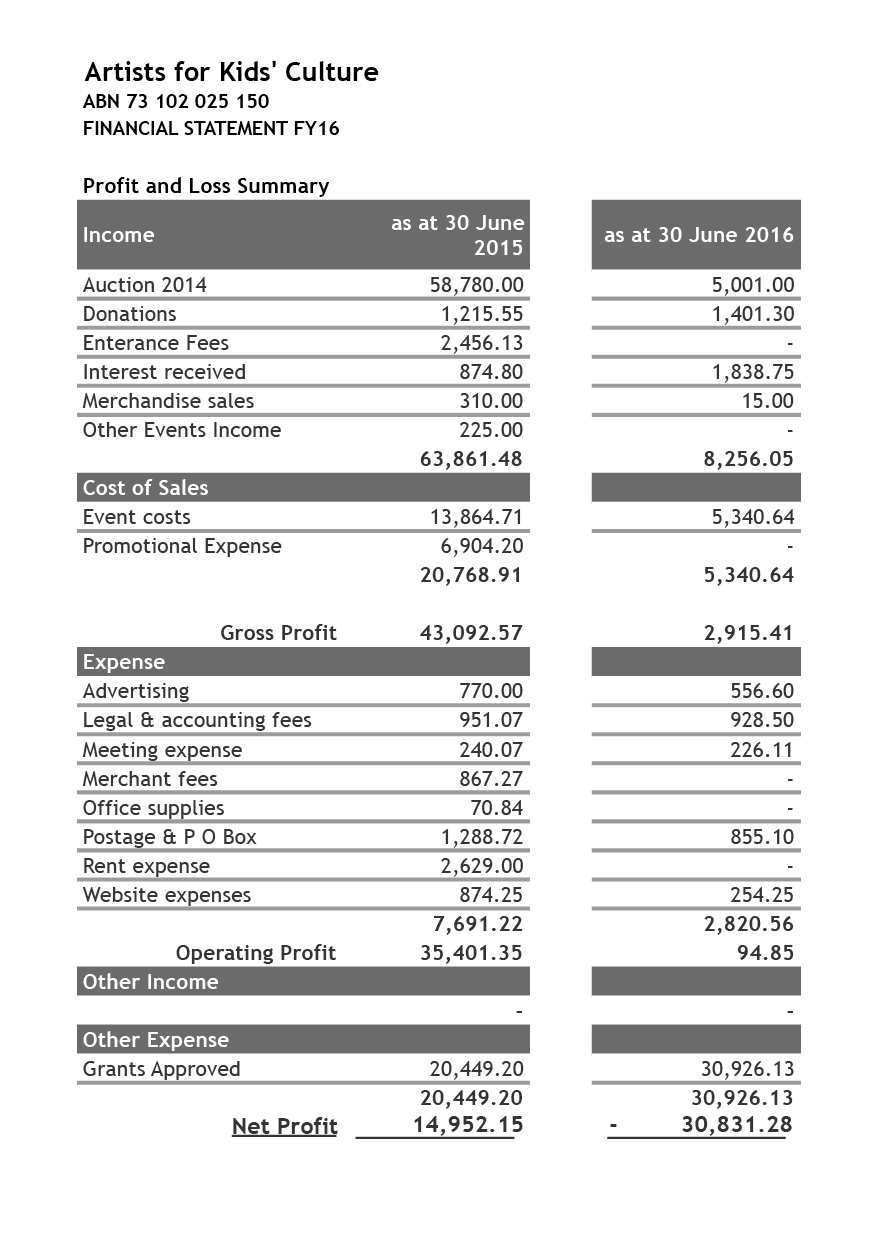 Lena Glass – Treasurer Note: are not required to have our Financial Reports audited as we are a small charity with no paid staff and income is under $250,000. ACKNOWLEDGMENTS & THANK YOU’s: AKC is a wonderful organisation with a fantastic Committee doing great things. We would like to thank all involved, especially the artists. We would like to also acknowledge Martin Kantor for allowing us to use BRIGHTSPACE as the home of AKC. In April 2015 AKC moved its files and belongings from a storage unit to BRIGHTSPACE. Sadly Martin passed away in August 2015. We would like to also to thank the outgoing Directors Tamara Boldiston and Barb Agar for their hard work and dedication to AKC. END DOCUMENT: Artists for Kids Culture – 2016 FY Annual Report

Your support can truly change a child’s life